Posted by chicagoterrainfactory in Hirst Arts, WAB on March 30, 2010

I may be biased, but Adepticon 2010 was a surprising success. Adepticon has always been a tournament players convention. We’ve worked for years to introduce a more casual speed to the gaming frenzy, after all – not everyone wants to play 11 high stress tournament games in less then 72 hours. This year, Adepticon literally took over the hotel. Tables spilled out of the halls and into the walk ways. Many people took advantage of the additional tables for pick up games, or sit down games with their friends. I want to say I saw Infinity, Fire Storm Armada and the Rogue Traders RPG being played (if you’re out there – send me an email and we can get you on the schedule for 2011).

In the open gaming hall, the demo games were well attended. Photos below are from the WAB demos I ran, the Old West battle game and the Vox Populi demo game.

Adepticon marks the end of my “gaming year”. All of the big hobby projects are wrapped up and presented. My big effort this past year was the creation of a WAB demo army – 200 figures for Rome and Carthage. Next year’s schedule is already filling up.

Posted by chicagoterrainfactory in WAB on March 29, 2010

Adepticon’s claim to fame has always been the team event. We were very pleased to have 12 teams of 2 players in this years Warhammer Ancient Battles doubles event.

Posted by chicagoterrainfactory in miniatures, WAB on March 2, 2010

Hannibal’s Veterans built from various Wargames Factory plastics.  Most of the figures use the mailed Roman body with helmets & shields from the Celt, Roman and Numidian kits.  Arms are mostly from the Numidian kit with wire NorthStar spears.

The army unit “Veterans” is a bit of a gaming term.  Hannibal brought with him a number of African mercs on his march from Spain to Italy.  How they were equipped is not well documented – being the losing army, nobody carved tombs or statues depicting these warriors.  We know (with some certainty) that Hannibal’s army looted armour and possibly weapons from the Romans after their early victories.  It’s possible that the units were re-armed and re-trained in the Roman style, but I am not certain what that means exactly.  For gaming purposes, the unit wears looted mail with shields and helmets from all areas of influence – Roman, Celt and Punic.  The primary weapon is a long thrusting spear in the style of the Roman Triarii. 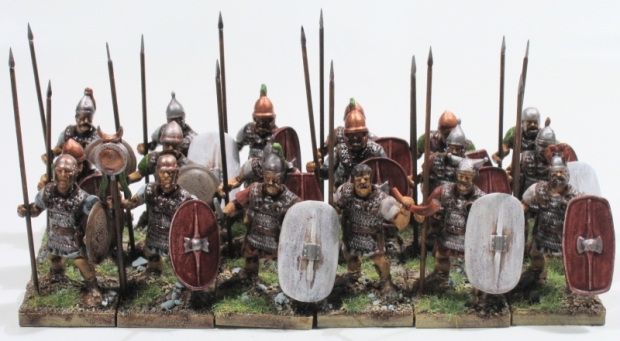 Hannibal by Sir Gavin De Beer – a 40 year (1969) text which has not aged all that well.  The book details the dates and places of battles (both major and minor) for the 2nd Punic War, along with overviews of the events leading up to Hannibal’s Italian campaign as well as his decline following Zama.  Little information is provided about the armies commanded by Hannibal (notes to follow).  From a gaming point of view it the listing of events in the second half of the Italian campaign.  Not nearly so important as Lake Trasimene or Cannae, but fertile ground for wargaming scenarios with small unit actions which would be easy to recreate on the table top.

Page 200 provides a pair of sentences stating that Hannibal re-trained and re-armed his men in Roman style following Lake Trasimene.  The author provides no further support for this statement.  Wearing captured Roman mail seems to be a well accepted notion.  However, I am doubtful that Roman arms were used if for no other reason than the expendable pilum would be hard for Hannibal to use and replace without the manufacturing capacity which Rome enjoyed.

The troops of the late campaign years are described as declining in quality, then finally replaced by Bruttium Italian mercenaries.  The authors statement of declining quality is not substantiated  by Hannibal’s continuous series of victories over the Romans.  No mention is made of what happened to the original body of troops:  Were they all killed in a decade of conflict?  Did the Gauls and Spanish slip away and return home?  Did the Carthaginian mercenaries depart on the handful of troop ships supplying the Punic army?

Hannibal by Theodore Ayrault Dodge.  Read the first handful of chapters, but did not get “into” the book.  Author seems to confuse details of the Roman solder of the Punic wars (212BC) and the Imperial solder of Trajan’s Column (100AD).  Left me wondering just how accurate the author’s other points of details may be.  I may come back at some time to finish the book – but its hard to find the motivation.

Legionary The Roman Soldier’s Unofficial Manual by Philip Matyszak.   The book is a fun read as the author speaks to potential soldier in 100 AD.  Good look into the daily life of the army.  Best hobby tip – the red die used on the Roman tunic tended to fade in the sun.  By the end of a campaign the army would return wearing pink.