Posted by chicagoterrainfactory in painting, WAB on December 4, 2009

Etruscan spearmen from Gorgon.  The figure line is set for 500 BC, but these figures will be incorporated into my Republic Roman army as Auxiliaries for the Punic wars.

Skin tone – tried for dark Mediterranean look using GW Graveyard Earth as the base, then working up with standard  Sand Brown and Ivory (both Vallejo).

Armor – GW Shining Gold.  Not the new fangled yellow gold, but the old hex bottle green gold.  Waited 10 years to find a use for this color – finally found what the color belongs on. 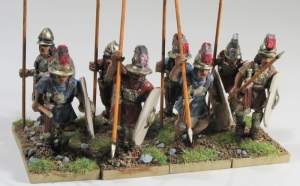 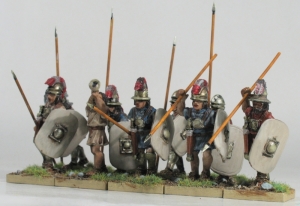 Posted by chicagoterrainfactory in miniatures, WAB on November 11, 2009

A re-do on the Etruscan Captain picture, the face should actually be visiable this time.  Also posted are pics of the 2nd class spear men from Gorgon.  The figures are easy to prep, with just a bit of drilling needed to open the spear hand.  A few of the figure angles are a bit odd, with one leaning way back and one leaning far forward.  I know some folks like action in their figures, but I could do with smaller angles.

After musing on using the Etruscans in the WAB Ancient Greek List, I’m having a second thought.  Instead (or additionally), I may them under the Republican Roman list as Italian forces fighting in the Roman manipular style.  Not 100% how to pull that off, but its an idea I’m kicking around. 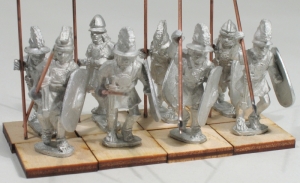 Posted by chicagoterrainfactory in miniatures, WAB on October 25, 2009

Etruscan Captain from Gorgon Miniatures.  For now, the figure will play as a command character in my Carthagian army.  Perhapes the figure will one day have a full Etruscan army to lead.

Posted by chicagoterrainfactory in WAB on October 19, 2009

Gorgon Miniatures released their new line of Etruscan figures.  I was lucky enough to pick up a few blisters this weekend & plan to work various figures into my Carthaginian and Roman armies.  But what about playing the Etruscans on their own – who are the Etruscans and how do the figures translate to a WAB army?

The Etruscans were a group of city states in northwestern Italy who existed as an independent culture from 900 BC through 100 BC.  They are most famous for being the original rulers of Rome.  The final king was over thrown in 509BC, leading to the legendary attack on Rome by Lars Porsena.  Little is known about the military structure of the Etruscans other than that they were strongly influenced by the Greeks and, in turn, influenced the Romans.

Weaponry:  Swords were rare.  Spear and axe (used as both a battle axe and for throwing) were the most common weapon.  Archery was practiced & bows are commonly found in Etruscan tombs.

Organization:  The main body of the army was arranged as Hoplites in the phalanx formation.  Light infantry, unarmored and armed with spears, attack from a distance & attempt to provoke the enemy.  Cavalry were used for skirmishing and to peruse routing infantry.  Chariots have been found in Etruscan tombs, but it is not known if these were used as transports or fighting platforms.

Army List: The Ancient Greek list from the WAB 1.5 rule book can be used to create an Etruscan army list.  By selectively choosing units, a conservative representation of the Etruscan army may be fielded and stay “tournament legal”.

What about the “fun stuff”?

Rome and her Enemies, a complication of Osprey titles.

Greece and Rome at War by Peter Connolly

A discussion on building an Etruscan list for Field of Glory.