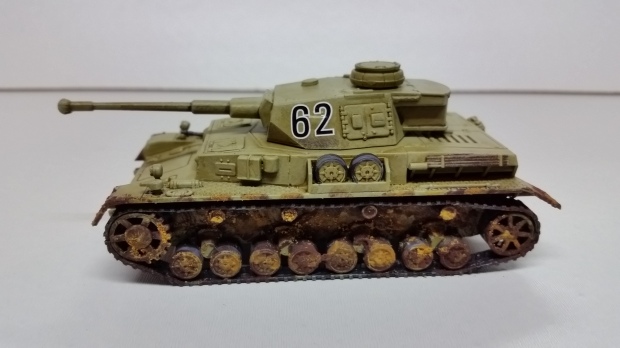 Same PzKpfw IV from a few days ago, this time with a muddy under carriage.

Vallejo Pigments (Rust and Oil) applied with a mix of Matt Medium, White Glue and water.  Applying the pigments was an interesting experience.  First I coated the area to make muddy with the medium mix, then applied Burnt Umber from the pot.  After letting it dry for 30 minutes, I applied spots of Dark Yellow Ochre.  The amount of fluid on the brush is important.  A wet brush makes for a smooth smear not unlike paint.  A dry brush applies the pigments with the the grain intact.

Base coat complete.  I’m pondering if I should add cammo, clean up the wash, or just add a few decals.

Sometimes, it just does not work out…

I’ve experimented with a variety of 3D prints for terrain.  Generally the results have been sucessful with the various smaller files that I’ve printed at the local library.  A few months ago, I backed Real 3D Fantasy Printable Scenery on Kickstarter.  For a reasonable price, I received files for four small medieval style buildings.  The test files printed without issue, but I the full scale buildings just don’t measure up.  The building comes in 5 pieces: roof, 1st floor, 2nd floor and 2 support pillars.  The print grain is rough, and the large flat sections warped during printing creating large gaps between the sections (and a funny looking pillar on the left).  A second, smaller building failed to print at all.  And worst of all, I paid more than $30 for the printing.  At that price, I can get a sharp looking MDF building from any number of companies.

“New” style Norman Knights from Foundry.  The figures display a few sculpting flaws (rough faces, sword hilts missaligned with scabards), but nothing that stops the figures from taking their place on the table top.

The ground work on the figures features grass tufts from Gamers Grass.  I rather like the tufts, the clumps are well formed, distinct and sturdy.  Tufts I’ve used in the past were thin and arranged like a spider’s web on the contact paper.

Harold’s Saxon army from my Adepticon game back in March.  Played in 2 ranks each, these figures gave me two divisions with a unit of Huscarls, two units of Coerls (and a small unit of archers not pictured here).  Most figures are Gripping Beast with the exception of the commander in purple with horn, which is from FootSore.

I need to thank my friend John, these were originally his figures which he gifted to me as part of his hobby clean out last year.  Having all these figures based and base coated saved me a huge amount of time when getting ready for Adepticon. 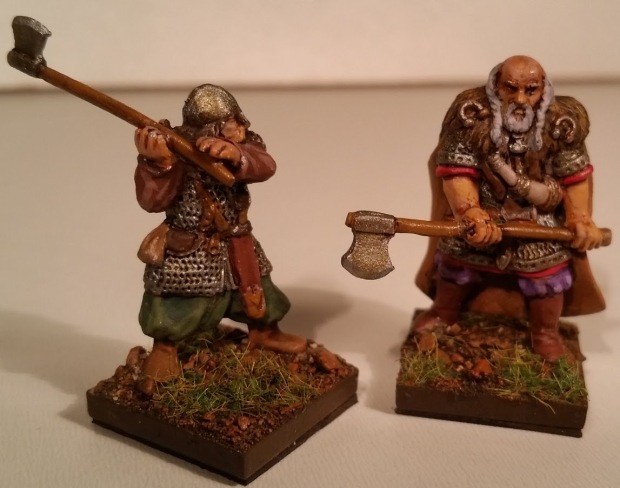 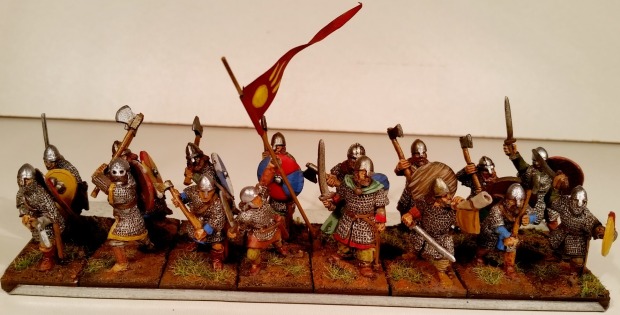 Rather than the lighter shades of my Crusader/Ancients armies, I chose to go with a darker/wetter looking ground effect.  Bases are rimmed with Bittersweet Chocolate with a Raw Sienna top coat, then flocked with pasture green grass.

My third and final Adepticon battle of 2016.  The Battle of Hastings was fought in the Saga Hall on Saturday night with copious amounts of wine, women and song (or at least beer and pizza).  Nine players joined the battle with 5 playing the role of Harold and his troops and 4 fighting as William and his Normans.

The challenge with Hastings is that the Saxons have zero mobility and a strong defensive position, while the Normans have plenty of fast knights as well as a strong rank of bows/crossbows.  Given that combination, motivation needs to be provided for the Saxons to do more than sit there and take on arrows the whole game.  The motivation took the form of an objective marker place behind the Norman left flank.  The second element is the historical death of Harold and his brothers. This was solved by giving three of the commanders 5 attacks, with the rule that any wound taken would count as a kill.

As luck would have it, the game played out nicely with the Saxons coming off the hill to engage the Britions and capture the objective.  The lure of 5 additional dice proved too much and successfully lead to the glorious deaths of Harold and his brothers.  With the death of its leaders, the Saxon line was broken and victory was declared for the Normans.

The iconic Battle of Arsuf almost did not happen this year at Adepticon.  I had a bit of an incident moving the armies into the hall.

Imagine this times four!  Took every minute I had before the game started to just get the figures back on their trays.

Despite the setback, we had a wonderful game with 7 players.  Bucking the trend from prior games, the Arab players pulled out a victory this year by taking the action to the Norman players.  King Richard was kept busy while the Saracens sent the Hospitallers packing.

We had very grand plans for Kursk in Bolt Action:  8 players, 8000 points per team, a 12×6 table with custom terrain.  Then 3 players and most of the German figures failed to show up.  We soldiered on with 5 players and 4000 points per team.  The game lasted five turns until a misplaced artillery barrage mangled much of the German assault on the Russian hill top.  Over all, the 8000 points and 70 some units was too much for the Bolt Action rule set, even with a team based dice draw system.  I think will try it again next year, after all – what else will we do with 2 dozen T-34s 🙂

Set up day at Adepticon

Main hall and Vendor hall getting setup for Adepticon.