A re-do on the Etruscan Captain picture, the face should actually be visiable this time.  Also posted are pics of the 2nd class spear men from Gorgon.  The figures are easy to prep, with just a bit of drilling needed to open the spear hand.  A few of the figure angles are a bit odd, with one leaning way back and one leaning far forward.  I know some folks like action in their figures, but I could do with smaller angles.

After musing on using the Etruscans in the WAB Ancient Greek List, I’m having a second thought.  Instead (or additionally), I may them under the Republican Roman list as Italian forces fighting in the Roman manipular style.  Not 100% how to pull that off, but its an idea I’m kicking around. 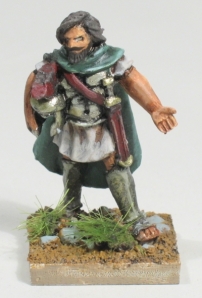 This entry was posted on November 11, 2009, 1:51 pm and is filed under miniatures, WAB. You can follow any responses to this entry through RSS 2.0. You can leave a response, or trackback from your own site.